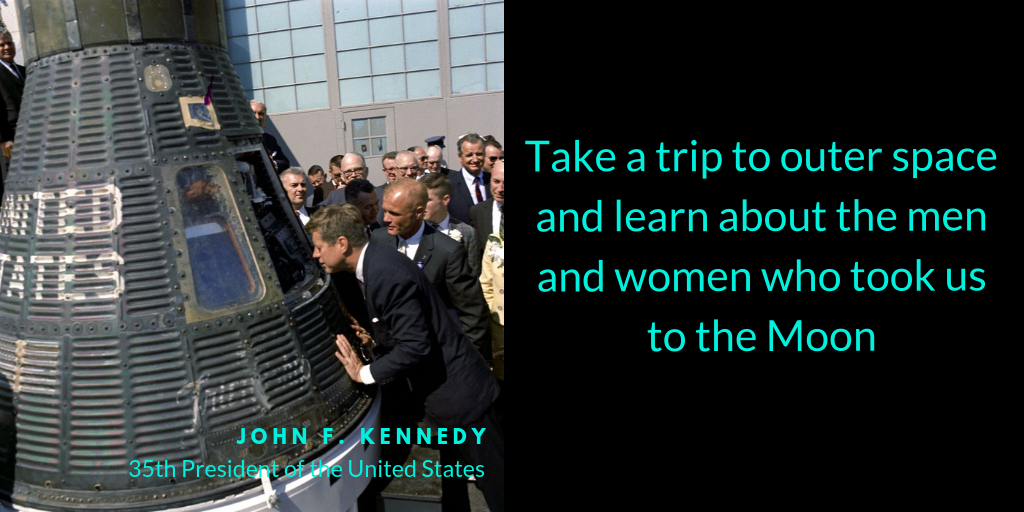 50 years ago, Neil Armstrong became the first human to step on the Moon. This would not have been possible without the vision and leadership of President John F. Kennedy who helped start this project a decade earlier. As we celebrate and honor the achievements that made the Moon landing possible 50 years ago, learn about the roots of this impressive human feat and the role that President Kennedy played in it through resources made available by the John F. Kennedy Presidential Library and Museum.

JFK in History: Background information on the Space Program

Historical essay on the space program during the Kennedy Administration.

The free JFK Challenge app for iPad brings American history to life for kids by turning them into astronauts and Peace Corps volunteers. Fly to the Moon or help people around the world with this exciting offering from the JFK Library.

We Choose the Moon (Note: This site uses Adobe Flash)

NASA Resources for Kids and Adults

Books recommended by the JFK Library and Massachusetts Librarians

This program is made possible by the Institute of Museum and Library Services, the Massachusetts Board of Library Commissioners, The John F. Kennedy Presidential Library and Museum, and your local library.

Find a local Massachusetts library. Search its catalog for materials that you can check out immediately.

Search over 50 million items in the statewide Commonwealth Catalog

If you find an item you want to borrow, just make a request and it'll be delivered to your home library in a few days.